The Delta II is another expendable launch system, that was designed by United Launch Alliance. The first launch of the Delta II was on February 1989. On top of that, the rocket has had over 150 successful launches. The final launch will happen sometime in 2018. Furthermore, the Delta II has three different performance options for payloads to low earth orbit. There is a 732X-10 that holds 1,870kg (4,120lbs), a 742X-10 that holds 2,210kg (4,880lbs), and a 792X-10 that holds a maximum weight of 3,470kg (7,640lbs). Although, there are other slightly heavier payload options if need be, like the Delta 7920H.  The height of the rocket is roughly, 125.75-feet tall. The diameter of the rocket ranges from 2.9m (9.5-ft) to 3m (100-ft). Additionally, the Delta II uses a RS-27A for its main engine that has 889.6kN of thrust. The rocket uses a Isogrid First-Stage Liquid Oxygen Tank and an Isogrid Fuel Tank. The second stage the Delta II is powered by a Aerojet AJ10-118K engine that has 43,383kN of thrust, that also includes a fuel and oxidizer tank that is separate by a common bulkhead. All of the engines used on the Delta II are manufactured by Orbital ATK. With this in mind, the Delta II offers two separate solid rocket boosters. The two options are a GEM-40 with 645kN of thrust or a GEM-46 with an additional 885.2kN of thrust. Moreover, depending on the payload requirements, the Delta II offers two different options for the spin-stabilizer third stage motors. The two solid rocket motors that are offered are a Star-37FM or a Star-48B. The rocket also offers three different payload fairings. There is a 2.9m (9.5-ft) dia metallic fairing, a 3m (10-ft) dia composite fairing, and a 3m (10-ft) dia stretched composite fairing. The Delta II can either launch from Vandenberg Air Force Base in California, or from Cape Canaveral Air Force Station in Florida. 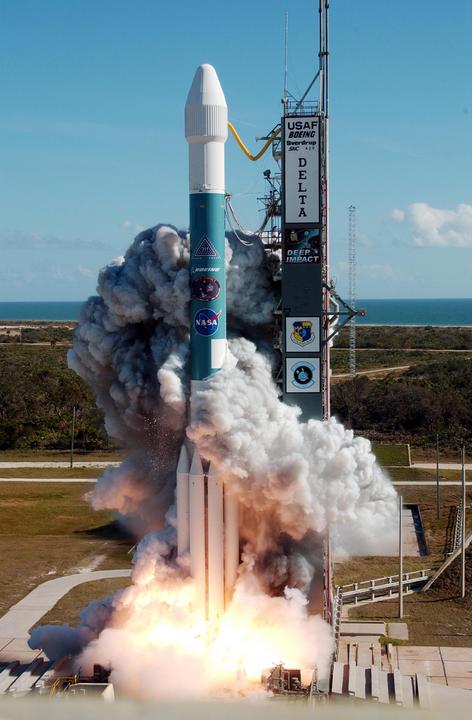