The Northrop YF-23 was an American stealth fighter jet, designed for the United States Air Force. The jet was manufactured and designed by Northrop Grumman and McDonnell Douglas. The Northrop YF-23 was first flown on August 27, 1990. The length of the aircraft is 20.6 meters (67 feet and 5 inches long), while the width is 13.3 meters (43 feet and 7 inches). Additionally, the height of the jet is 4.3 meters tall (13 feet 11 inches). The Northrop YF-23 uses two Pratt and Whitney YF119 turbofan engines and or two General Electric YF120 turbofan engines. Each turbofan engine can produces 156kN of thrust (35,000 pounds of thrust). The aircraft is able to reach speeds of up to mach 2. The maximum altitude the jet can reach is an impressive 65,000 feet. The jet comes equipped with either 4 AIM-9 Sidewinder or 4 AIM-120 AMRAAM.  Moreover, there were only two Northrop YF-23 made, while one of which is stationary at the Zamperini Airfield. The YF-23 uses: Garret Auxiliary Power Unit, C-Band Beacons, IFF (Identify Friend or Foe), INS (Inertial Navigation System), TACAN (Tactical Air Navigation System), ECS (Environmental Control System), and more. (All of these products are used for the Avionics and Systems for the Northrop YF-23.) Unfortunately, after four years of development and planning the Northrop YF-23 was cancelled due to the Northrop YF-22 beating it out of the competition. 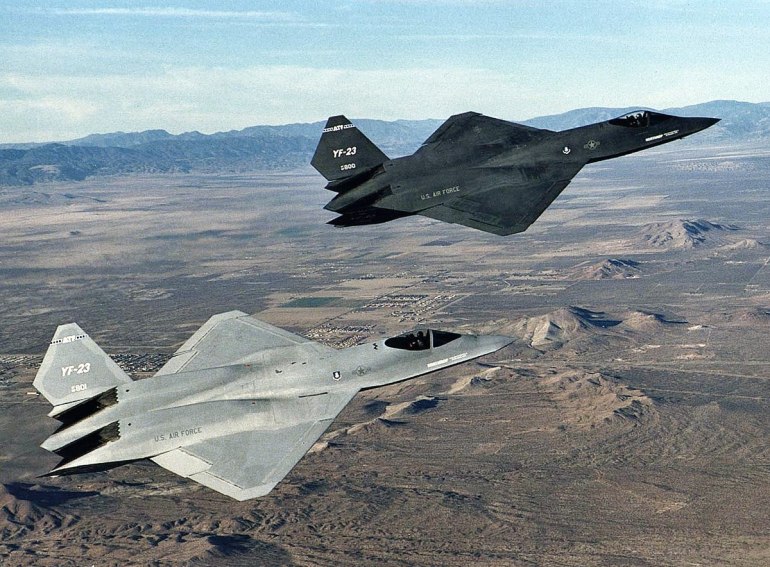